Eureka's Children is primarily an association of the descendants of those involved in or associated with the Eureka Stockade event, its prelude and aftermath and those who support its ideals of democratic principles.

Membership is open to all descendants of who were involved in the events of Eureka.

To see a video about 'Who are Eureka's Children' Click Here 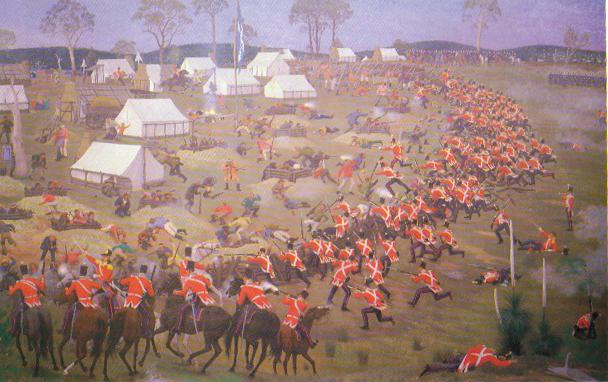 The Association believes that the roots of Eureka and the stance by the diggers at the Stockade lie deep in the soils of many nations. Among the thousands of people who came to the Victorian goldfields were refugees from political oppression, from economic disaster and from famine. Many had experienced revolution.

They had come to a new land with the hope for a better life and many with a ferment of ideas concerning social justice, the rights of man and the principles of democracy.

At Eureka and across the goldfields,  these hopes and ideals were severely challenged and diminished by an authoritarian and rigid class-conscious government of the old European order that imposed excessive gold licence fees and licence hunts, ignored corruption and abuse by police, restricted political rights and access to land  and who were “determined to put down  democratic agitation”.

And so, it was at Eureka that the diggers built their Stockade not to launch an attack but to stand and defend, under the flag of the Southern Cross, their rights and liberties, to protest against oppression and corruption, to fight for freedom and to assert their democratic rights.

Whilst the Eureka Stockade was a battle lost – it was a victory won;  as it was the courage and vision of the diggers and their supporters that contributed to the installation of a more responsible and democratic government soon after this historical Eureka event.

Furthermore, the Association believes that the story and importance of Eureka is not just about a bloody battle at the Stockade where men were prepared to lay down their lives for their ‘rights and liberties’, but also it is about that  series of well organized, non- violent  democratic events by the diggers and their supporters preceding  the Stockade  that illustrate the power of the people in demanding their ‘inalienable rights’.

These events which include: the Monster Meetings at Bakery Hill, a Charter - a Manifesto proclaiming their Demands and an Oath under the Flag of Southern Cross, are powerful and important iconic democratic symbols. They speak to us of the importance of a free society being prepared to react to oppressive authority while seeking fairness and equity, valuing human rights and respecting human dignity. They wanted a government of the people for the people.

The Association seeks not only to commemorate the events of Eureka but also to encourage a broader discussion about the values inherent in the goldfields community's quest for representation and basic freedoms and the role that these democratic ideals and values have in our contemporary Australian society.

Eureka's Children makes representation to all levels of government and other organizations; promoting the story of Eureka, the Museums of Australian Democracy at Eureka (MADE) and in Canberra, as well as promoting Eureka's Children various activities and objectives.

The Association was incorporated in 1998. It has a Web Site and publishes a quarterly newsletter 'Liberty!' which includes articles of special significance regarding the Eureka story, issues concerning our democracy, Eureka events and commemorations and other matters of general interest. The newsletter is available for download CLICK HERE

The membership of the Association is predominantly made up of descendants of the diggers and others associated with the events of Eureka in 1854. See description above.

Membership is open to people and corporate bodies who may not be descendants but who have a special interest in Eureka, its ideals of democratic principles and who wish to support the work of Eureka's Children.

Eureka’s Children contributes substantially to the planning of the annual Eureka Week Commemorations.

In We organise and oversee the Eureka digger's march from Bakery Hill to the Stockade, the Demanding Democracy March and Theatrical Presentation as well as assist St. Alipius Church in presenting the colourful and uplifting Eureka ecumenical service.

In Eureka's Children hold the Annual Eureka Dinner at the Melbourne Celtic club, that includes a notable guest speaker and at which the Eureka Democracy Award is presented.

In In 2013 Eureka’s Children Canberra Chapter was launched at a special dinner on December the 3rd at the Canberra Southern Cross Club in Woden. The Chapter now holds a Eureka Commemoration Dinner each year in December.

National Conferences Eureka's Children contribute speakers to various conferences on matters related to the Eureka story and generate discussion and debate when appropriate on a range of Eureka related issues.

The Eureka Democracy Award given by Eureka's Children is presented to an individual or organisation who by their actions; have contributed to a more democratic and just society, have kept alive the vision of democracy in contemporary Australian culture and which reflects the values established at Eureka